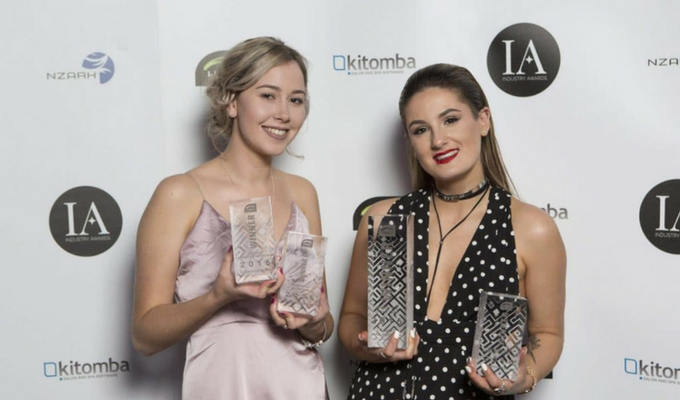 Meet Liana King-Biddulph, HITO Apprentice of the Year, NZARH Hairstylist of the Year – Next Generation, and WorldSkills gold medalist.

“For as long as I can remember I’ve had an unshakable passion for hairdressing,” Liana says. “I adore people, being creative, and making others feel wonderful. There wasn’t ever one moment where I fell into a career in hairdressing – it was always inside of me”.

As soon as she could, Liana volunteered her time in local salons. She left her hometown of Queenstown at 17, moving to Dunedin to attend local hairdressing school Harrington Vaughan.

“I started my training at a school, but I wanted to work fulltime so badly,” Liana says. “Every Friday I was in a salon doing work experience, and I was constantly visiting salons with my CV, applying for any apprenticeships I could find”.

Liana is currently an apprentice at Moha in Dunedin.

“I spent a whole day handing out my CV, and Moha was the last salon I visited,” Liana says. “Kylie and Nelson [owners of Moha] weren’t even looking for an apprentice, but I was fortunate enough to be able to change their minds”.

“I love being in the salon,” Liana says. “I get to build my clientele and grow relationships over time, and I’m working towards my dreams every day”.

Liana worked hard to get her apprenticeship, and she works hard in the salon and the community.

“Hairdressing is a demanding career, both physically and mentally,” Liana says. “If you love being busy and being around people, it’s the perfect job. There are many opportunities to be creative and meet inspiring people across the world”.

Her hard work has paid off this year, with Liana winning the gold medal at WorldSkills, NZARH Hairstylist of the Year – Next Generation, and, of course, HITO Apprentice of the Year.

“I’m nearly ready to finish my qualification, so this was the last year I could apply for Apprentice of the Year,” Liana says. “I wanted the title incredibly badly, and I’m so honoured to represent HITO. I feel like all my hard work has been recognised”.

“Getting involved however you can is really important,” Liana says. “It helped me win Apprentice of the Year and improve my skills too”.

One of Liana’s other successes this year was winning NZARH Hairstylist of the Year – Next Generation. The Next Generation winner is picked from junior competition entrants in the NZARH (New Zealand Association of Registered Hairdressers) competitions.

“Practice and confidence are key to winning competitions,” Liana says. “Competing live can be anxiety-inducing – it was for me – but getting out there and competition will help reduce that anxiety and build your confidence. Keep entering and competing”.

As the winner, Liana receives free flights to anywhere in the world. If she’s invited to compete at WorldSkills International in Abu Dhabi, she’ll use the flights to get there. If not, she’s got plans to head to an international Fashion Week and work with the Redken team.

On top of those two wins, Liana also took home the gold medal at WorldSkills Nationals earlier this year. WorldSkills is an international competition where young tradespeople compete and share their skills.

“I never thought I would win this one,” Liana says. “I’ve been training for WorldSkills since 2014, and it’s improved my ability to think on my feet and create outside the box”.

The highlights don’t end there. Liana also worked at NZ Fashion Week and the NZ Video Music Awards, and on a local production of the musical Grease. She also assisted her boss Kylie Hayes on a photoshoot for Sydney Hair Expo and at a three-day education event for Redken.

The next step for Liana is (hopefully) competing at the international WorldSkills competition in Abu Dhabi, where she’ll show off her skills in front of hairdressers from across the globe. She also hopes to make it onto the Redken Artistic Team.

“My ultimate career goal is to be an International Platform Artist,” Liana says. “I would love to travel the world, sharing my passion and knowledge”.

“I’ve met so many amazing hairstylists and had so many incredible experiences,” Liana says. “I’m truly blessed to have achieved so much in four years, and I can’t wait to see what lies ahead.”